We ran our last mission mission today. In addition, we also tested automated profiling, and ran automated profiling missions. Everything went smoothly and we are one step closer to running complete science missions (including profiling) autonomously in addition to bathymetry missions.

Kristof, Chris, Rachel and Vicky as the bot is pulled out for the last time.

We also managed to do a reasonable amount of robot disassembly and packing work today.

Peter and Bill loading up the syntactic foam into an ATV.

The syntactic foam is packed into yellow boxes that will be sling loaded by helicopters and flown to McMurdo tomorrow. 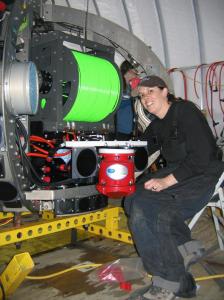 Rachel working on disassemblng some components.

The profiler in the process of being taken out of the bot.

One of the science objectives of this year’s mission is to perform exploration of Taylor glacier, including sonar and visual imaging. This will require the robot to operate below the halocline. The halocline is at about 16 m depth and forms the dividing line between the freshwater lens at the top and the highly saline water at the bottom. The higher salinity of the water below the halocline means that the robot has to be ballasted with about 200 lbs of extra weight to be neutral in this layer. Since we do not want to unnecessarily disturb the halocline, the robot will start above the halocline from the bot-house. It will then drive to another melt-hole near the glacier another melt-hole close to the glacier, where we will lift it out partially with a gantry and ballast it.

Maciej, John and Peter have been working on getting this melt-hole ready for the past few days. They are almost done, and have the gantry installed today. The gantry will be used for partly lifting the bot out of the melt-hole.

Maciej and Jim working on the new melt-hole next to Taylor glacier. It has taken them about 5 days to get this far. 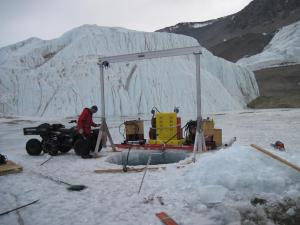 Maciej, Jim and Peter finished installing the gantry for lifting the bot today. 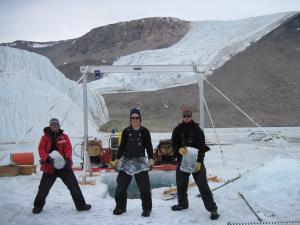 We worked on a variety of issues today. Bart, Chris, Kristof and I worked on figuring out why we did not receive images form the sonde camera. Bill and Vickie tested the radio beacon. Maciej left for McMurdo and a replacement GA flew in.

But the highlight of the day was Vickie’s dive into the lake through the melt-hole. The main objective of her dive was to figure out whether the melt-hole diameter up-to its entire depth was large enough for the bot, and whether there were any jagged edges that could damage the bot or the fiber. We suspended an ice-axe for her which she used to chip away the rough surfaces. This makes her the first woman to dive in west lobe of Lake Bonney!

Bill helps Vickie into her dive gear. Several layers and a complete body suit has to be worn to dive in water this cold. 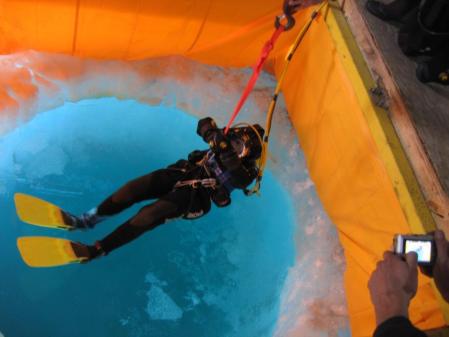 Vickie being lowered into the melt-hole.

I fed "the umbilical" cord to Vickie. This cord is fed as the diver requests or as the feeder senses the diver's movements. The idea is to not feed too much because the diver can get tangled but not pull too much to restrict the diver's motions. The umiblical a safety line to pull the diver up. Chris hung an ice-axe suspended from a chord down which helped us assess the melt-hole diameter.

Bart putting on the "syntactic foam" that adds buoyancy to the bot and allows it to hover.

We use bungee cords to tie some of of our stuff to the front of the ATVs. In our hurry to get to work, we used a 'normal' cord instead which got tangled in the wheel of an ATV. At the end of the day, Jim and Bill figure out how the problem and get the cord out.

First dunk of the bot in water

We performed the first dunk test of the robot yesterday. This is done by just hanging the bot in water from a crane. The flotation “syntactic foam” is not put on. The aim is to check for leaks in hardware, and make sure the entire system works in water.

Melting the hole took way longer than we expected. The day began by the hole frozen over with ice. Rest of the story in pictures below.

The melt-hole was frozen over with ice.

Jim first broke the ice with an ice-axe.

After breaking the ice, we put the heating coils in water to melt the walls of the hole. Kristof spent almost the entire day tending and moving the coils to get a smooth sided circular melt-hole.

I felt much better and was able to work all day, though still far from 100%.

The bot being dunked into water.

Bart observing the bot. There were no leaks and the profiler worked as expected, except that we could not get images from the sonde camera. 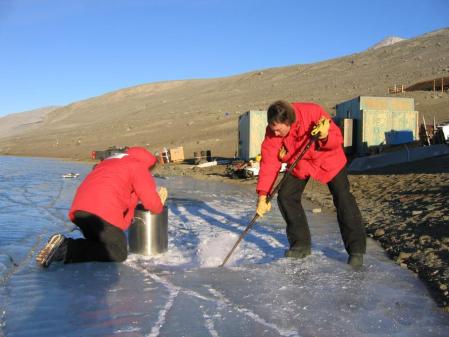 Chris and Kristof chooping off ice for water at the end of the day.

The day began rather badly for me. The dust-exposure had set my immune system into hyper-active mode. As a result I woke up with swollen lips and throat – classic signs of food allergy. I could not swallow even water. I started to panic a bit but ate an anti-histamine and took the day off. I slept for most of the day. Emma was a ray of sunshine all day and made  delicious pumpkin pancakes. First meal that I could eat in many days!

Maciej and Jim came by to the jamesway in the afternoon. They are having a very hard time getting the melt-hole right. First, the “hotsies” that are used to generate the high power necessary for melting the hole have suffered from frequent break-downs. Below is a picture of a hotsie that actually caught on fire last night. Second, the melt-hole quickly refreezes and grows a layer of ice up-to 3 inches thick. Maciej has also injured his arm and back due to all the heavy lifting and is rather in bad shape today. 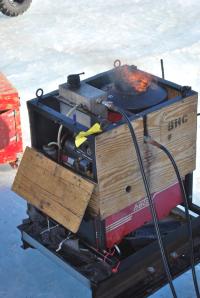 One of the "hotsies" for generating power for melting the ice-hole caught on fire yesterday.

The team came back in the evening when Emma had cooked an awesome dinner and pumpkin cakes for dessert. We all had a good time. 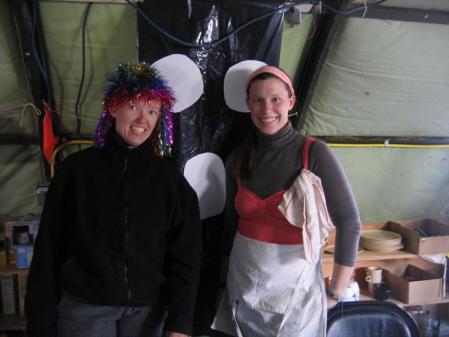 Vickie and Emma in their Halloween costumes. Emma dressed as a 70's housewife.

Partying in the "jamesway" or living quarters at Bonney camp. 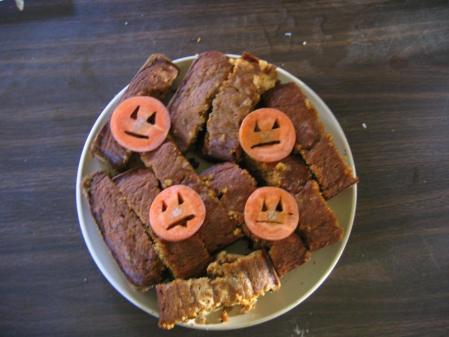 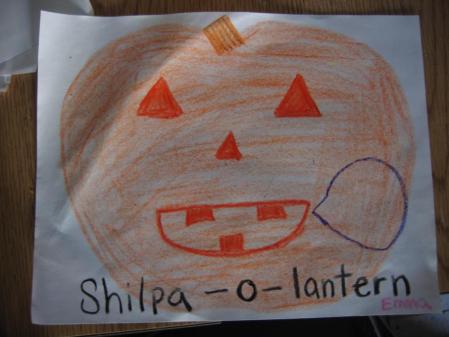 Emma gave hand painted and personalized pumpkin drawings to everyone. Mine had an empty "speech box" because of lost voice.

Finally the weather cleared and the entire team had reached Bonney. We flew to help with the Bot-house construction at West Lake Bonney. The Bot-house is up and the carpenters are setting up the electricity and propane heating today. We took the morning off to fix up the stuff in our tent, and clean-up the East Lake Bonney living area.

It was a pretty miserable day for me yesterday.  The rooms at McMurdo are not cleaned for ages. In the process of vacuuming the room, I inhaled some dust that resulted in throat inflammation and trouble breathing. Getting sick in McMurdo is almost a right of passage – that’s what happens with 6 people per dorm room, multiple changing room-mates, almost  1000 people packed in small area, and hardly any cleaning of dorm rooms.

Anyway,  I hardly got any sleep the night before last, and then took the helo flight to Lake Bonney, and was out working (or at least trying to work) in the cold and it was pretty miserable. I did manage to stay warm and sleep well in my tent last night. I am much better today, though my voice is almost gone and I still feel a bit fatigued. Bill says that this is an adjustment phase and I will feel fine soon.

Vickie, Chris and Rachel getting ready for the flight to Bonney.

Chris and I in the helicopter during flight.

View during flight to Bonney. 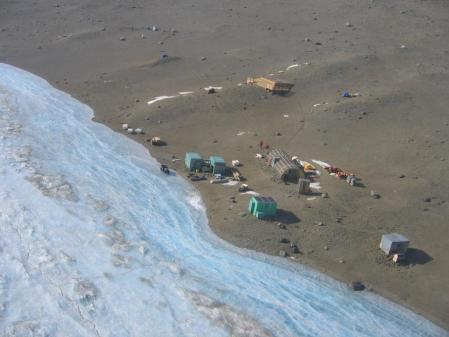 East Lake Bonney camp. This will be our home for the next 5 weeks.

Myself in front of the Bot-house which is being set-up by the carps (for the most part) with Bill's supervision.

Chris, Bart (on the stairs) and Kristof setting up part of the Bot-house.

Some of our cargo (the robot's batteries) being unloaded from a helicopter).

A helicopter flying a sling load. Background is Taylor glacier.

One of our ATVs ran out of fuel on the way to Bonney camp from Bot-house. This is about 12 min at about 10 mph.The other ATV had to run back to Bot-house to get fuel.

Six of us, along with the bot and cargo were supposed to fly out to Lake Bonney today morning. However, the weather was foggy and windy in the valley. We are still on hold, but a test flight with some cargo will be flown in now. If that works, we may leave by evening. However, this means building the Bot-house tent in the evening so that the bot does not sit out in the cold all night, which may not be possible. We are waiting to see what happens.